September 14, 2018
Now evolution is a slow process, and as humans and smartphone users this evolution to 'not drop things' is going to only happen in a million years. It's easier to redesign bodies/smartphones.

I shattered two phones in the last two years, two screens I got replaced were expensive and quite a hit on the pocket. Humans drop things.

What I don't understand is that the screen is the most sensitive part of the phone yet it shatters easier than feather. The phone has other parts too- an incomprehensibly well made PCB, modem, battery, and the casing. Now the parts above with respect to screen are packed in this fashion primarily for three reasons: packing, protection and function. The case's job is to protect, the electronics are for function, and fasteners/glues for packing.

It's pretty clear that current design of smartphone fails pretty badly at protection: one of the most expensive parts, the screen(aluminosilicate glass) is just a part that's yet to evolve as a hardened material, or oriented badly so that the most adept human gesture of grasping objects with a small false negative that's called dropping.

What if phones were designed as shuttlecocks

Understanding the beauty of fall

Not that we've played a lot of badminton.  At 108 in Baba's room there's been a shuttlecock hanging on the window. The most beautiful thing to be as an observer in a shuttlecock is the orientation it falls in.

No matter how you drop it >90 percent of impact will be dampened in the first hit on the ground.

This primarily happens because of how shuttlecock is made. 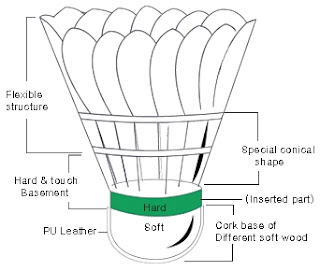 If we were to design a shuttlecock where the flexible parts are stiff, it'd still fall as a regular shuttlecock, (considering we use a lightweight material).

Clearly, weight and density distribution is everything here. e.g.

e.g. This configuration preserves the shape and dimensions, but has density distributed on the side. Photo: MIT

Let's assume there's a hard block of plastic ABS that we were to 3D print in a way that it's weight distribution(COG) falls through one of the edges- i.e. graded density.

We've to design electronics, and fuse the above components in a way that the phone's weight distribution(COG) falls through one of the edges. That's the only place where you put a bit of padding- instead of carrying a bulky phone case.

Popular posts from this blog

June 19, 2022
Ideas for better engineering. I’m very passionate about applied and analytical material science with a background in leading startup initiatives. I had built a haptic wearable startup with synthesis gait analysis and haptic feedback through wearables, which exposed me to several schools of design and engineering, and on-ground impact. This had bought me to Boston at MIT to explore advanced forms of man-machine-interfaces. I have transcended from just being a techie, someone who enjoys impacting social problems using tech. In recent years, I have shifted from consumer devices into supply chain innovation leading to carbon offsetting, which exposes me to various operational, perceptive and implementation challenges.  I come from a farming family first-generation engineer, born around the invention of the internet- in the early 90s I used to hear how repairability was a desired feature in tools around us, and local was the way to go. In today’s hyper-connected time- being in d
Post a Comment
Read more

September 29, 2009
I happened to stumble across a gesture pad devised by Shekhar Borgaonkar. Needless to say, its one of the most wonderful innovations as per inputting Devnagri(Hindi) script is concerned. Due to its complexity, the Hindi based keyboards used today aren't user friendly at all. A beginner cannot think of using the same for text entry. Interfacing the same to a touchscreen/stylus-input make it intuitive, and hence cut down the learning curve required to type hindi into Computers/cellphones. Exactly as Shekhar says "I think this will benefit India because many people will be able to interact with computers for the first time in their life. " The demo of the concept is downloadable here
Post a Comment
Read more